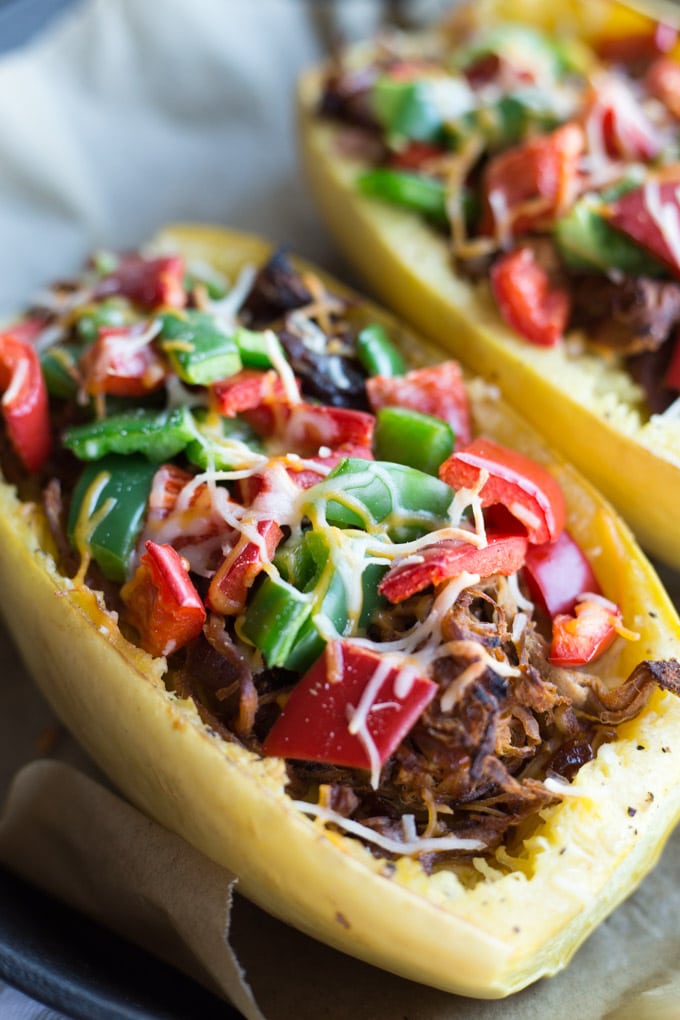 Okay, before we get into today’s recipe, I just have to say that I can’t believe this is the 50th recipe I’m sharing on Crumb Top Baking!! When I first decided to start a food blog a year ago, I had no idea where to start, or even if I would stick with it. But almost 8 months after launching Crumb Top Baking, I can honestly say I’m having so much fun with it!

There are so many elements to running a blog (some of which are not so fun), but my favourite part continues to be the recipe creation process. Okay, the food photography is a close second 😉 ! And it makes it all the more fun to be able to share my recipe creations with you guys. So whether you provide feedback here, on Instagram or Facebook, or even in person, I just want to say thank you! Thanks for visiting, thanks for making one of my recipes, and thanks for your overall support! You’re the best! 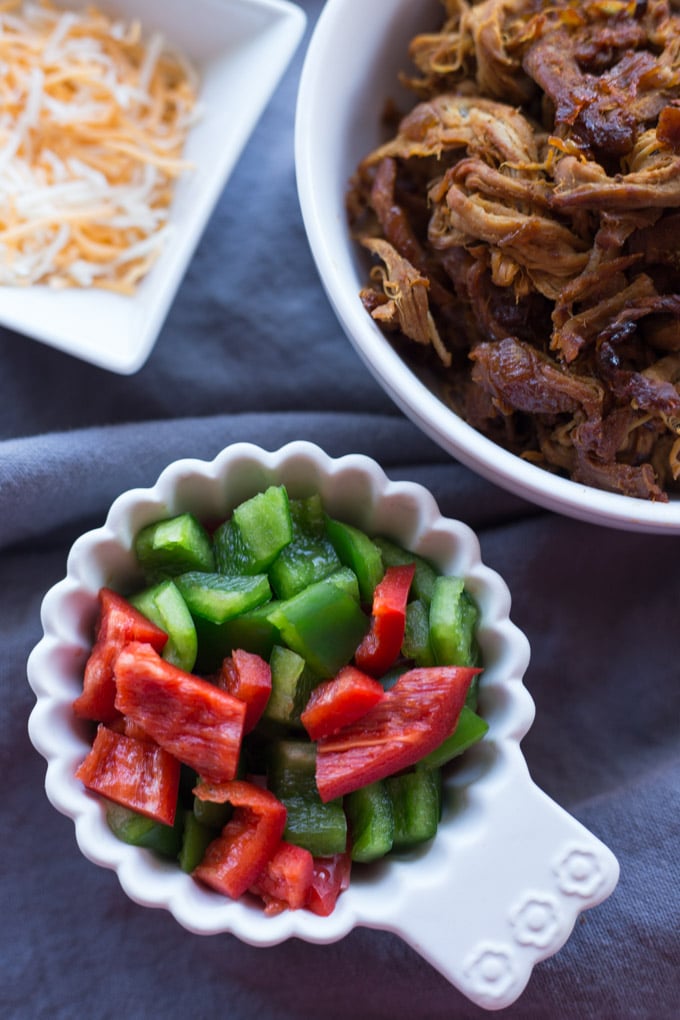 So now that the mushiness is out of the way, let’s move on to today’s recipe for Maple Pulled Pork Stuffed Spaghetti Squash!

This is one of those recipes to file under easy and family pleasing. While it takes about 4 hours to see this recipe through from start to finish, it doesn’t require a lot of work. That’s because one of the best things about roasting squash and slow cooking meat is that you really don’t have to pay attention to it. You just put them in the oven and/or slow cooker, and forget about them. Okay, I set a timer, but at least I don’t have to constantly check on them 😉 . 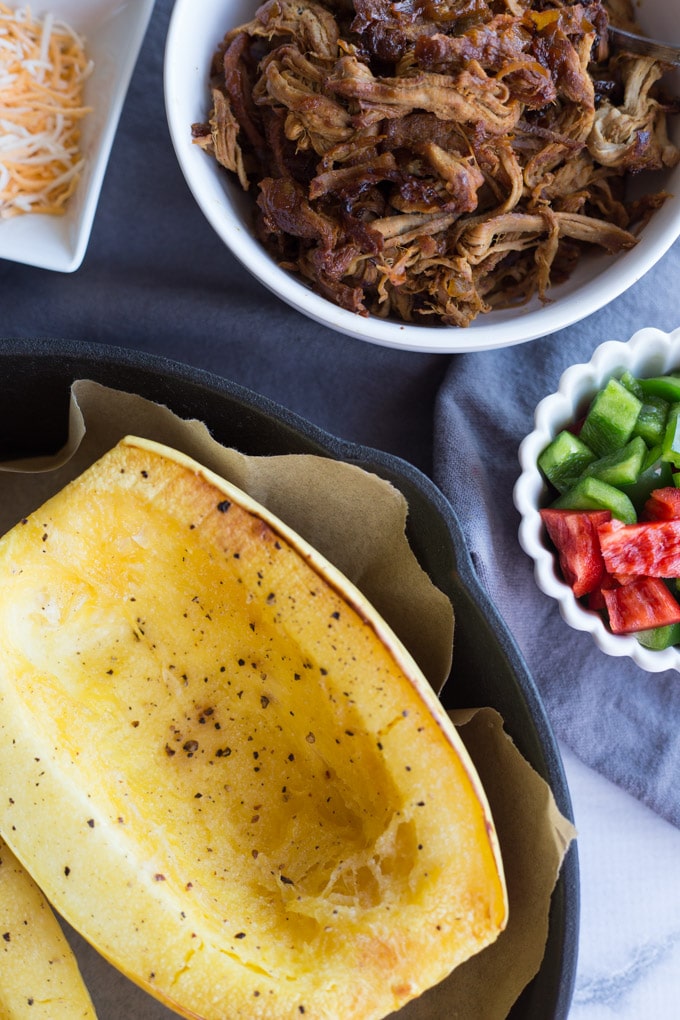 So the maple pulled pork for this recipe has been on repeat in our house for the past 10 days. And that’s not because I was trying to perfect the recipe. It’s because we’ve been adding it to everything! Aside from spaghetti squash, I’ve been adding it this balsamic roasted beet salad, and my husband has been using it for sandwiches and as a pizza topping.

The maple pulled pork is a pretty easy recipe to prepare in the slow cooker. I just coat the pork with a smokey spice mixture consisting of garlic, cumin, chili powder, smoked paprika, salt and pepper. And I slow cook it with a chopped onion and a maple syrup/mustard/vinegar mixture.

The result is a sweet and smokey pulled pork that is a bit caramelized and perfectly tender. So good! 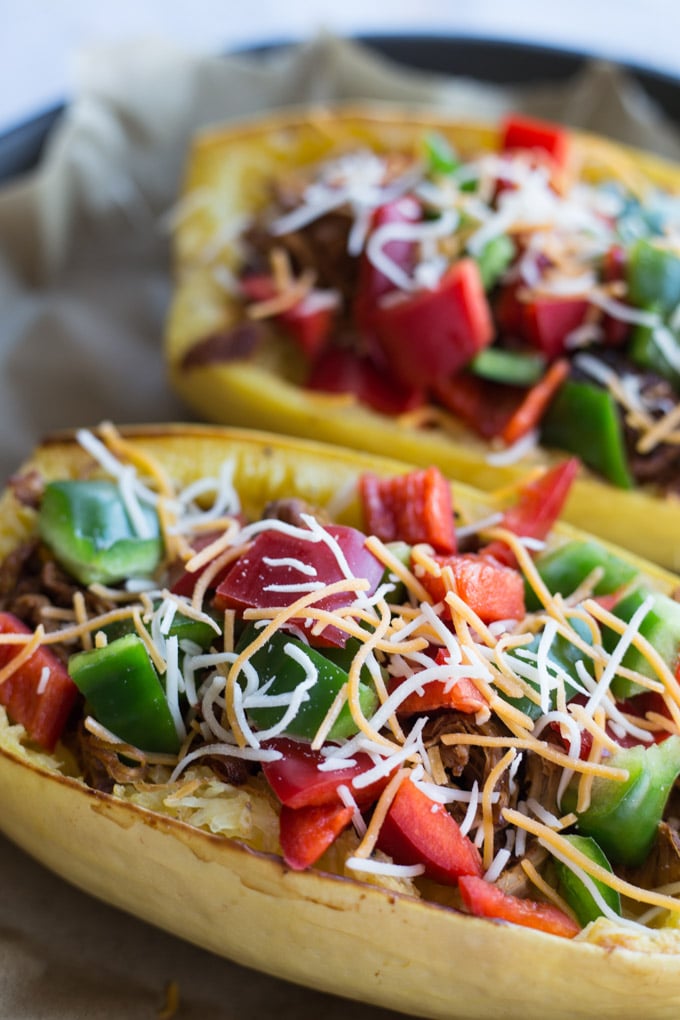 To prepare the spaghetti squash, I just cut it in half, scoop out the seeds and drizzle with some olive oil. You can season it however you like, but I usually keep it simple with salt, pepper and garlic powder. Then, I just roast it for 30-40 minutes and when it’s cooked, I scrape through the flesh with a fork to create spaghetti noodles. You can scoop it out or leave it in the skin for a stuffed squash.

If you couldn’t tell, I’m loving spaghetti squash lately. It’s easy to prepare and a great alternative to carby spaghetti noodles (carby is a word, right?). It’s also a nice change from zucchini noodles. Don’t get me wrong. I enjoy my share of zucchini noodles, but some days I’m just not in the mood to break out my spiralizer. And since the spaghetti squash is a little less messy, I’m going to run with it as long as it’s in season! (Which probably won’t be for long since my husband had to go to three grocery stores yesterday to find one!)

Once the pork and squash are ready, just assemble and bake. By assemble, I mean add the shredded pork to the top of the spaghetti squash noodles. Load on some red and green pepper (and other veggies if you like), add a bit of cheese and bake for about 15 minutes. Dinner is served! 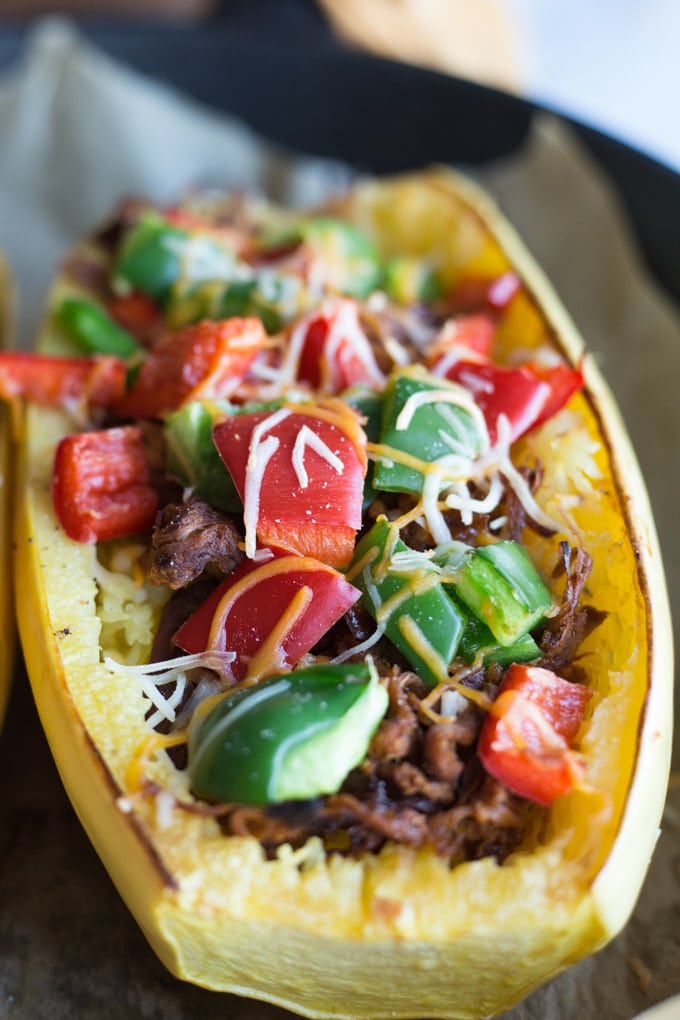 This recipe for Maple Pulled Pork Stuffed Spaghetti Squash is enough for two. But the recipe can easily be doubled to feed a family of four, or to make ahead for weekday lunches (because this dish heats up perfectly in the microwave)!

If you make this, be sure to let me know what you think in the comments below, or on the normal social media channels! Enjoy the rest of your week! 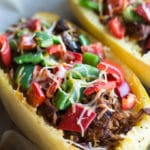 Spaghetti squash noodles topped with sweet and smokey pork, loads of red and green peppers and a sprinkling of cheese. This Maple Pulled Pork Stuffed Spaghetti Squash is easy, delicious and just the perfect weekday supper!

For the maple pulled pork:

For the stuffed spaghetti squash: 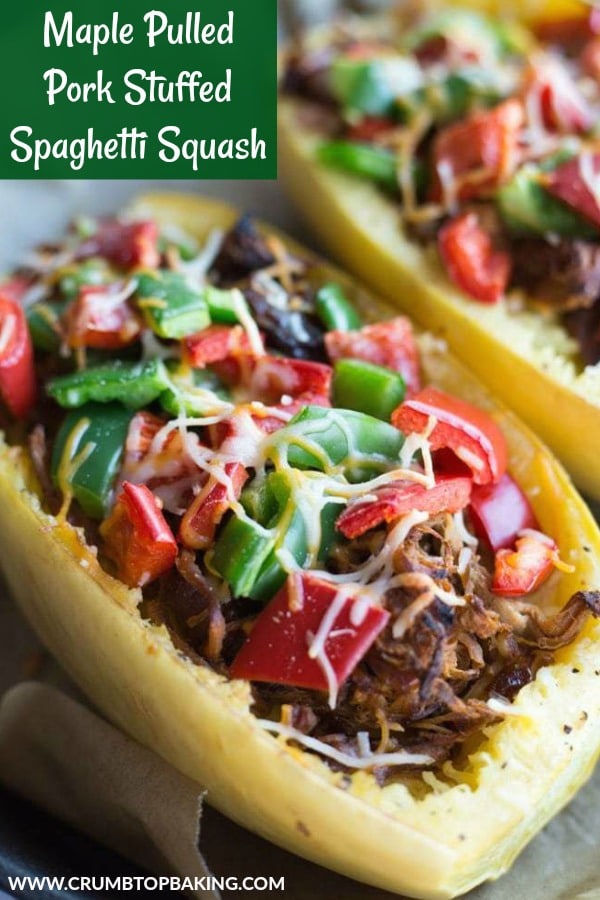 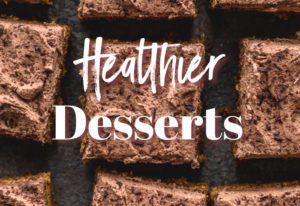 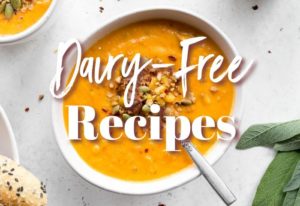 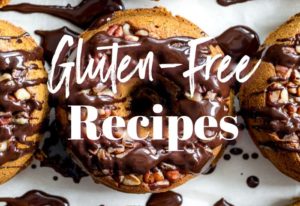 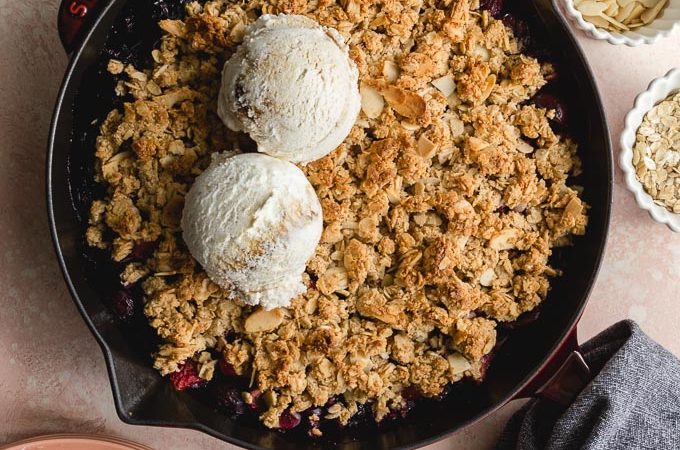 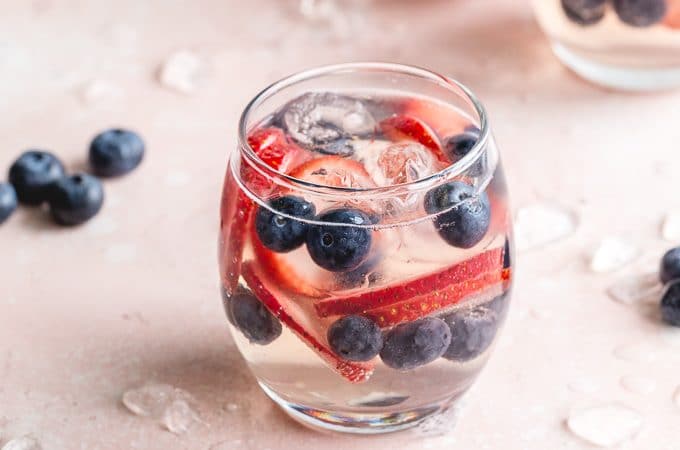 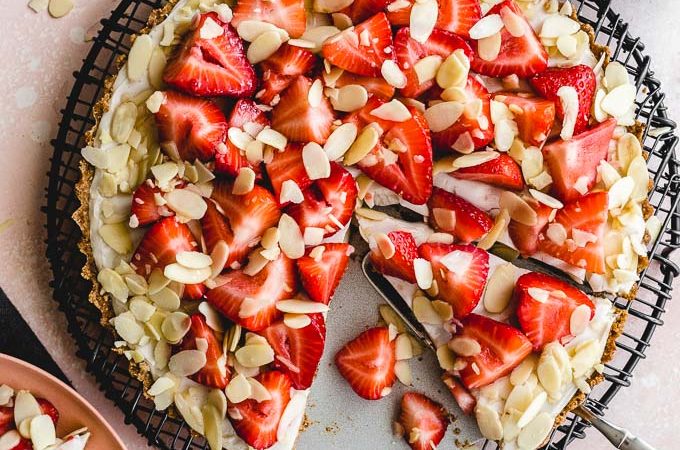