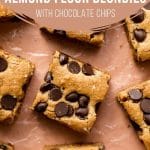 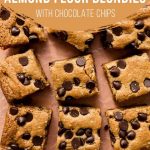 Almond Flour Blondies are soft and chewy with a rich butterscotch flavour and plenty of dark chocolate chips. They’re also gluten-free and dairy-free, made with almond flour and no butter!

These blondies are a go-to sweet treat for us, especially when we’re craving something decadent!

For a festive version, try these Christmas Blondies with peanut butter and holiday sprinkles!

I’ve tested so many different combinations of ingredients for this almond flour blondie recipe. I wanted to keep the standard elements of brown sugar and vanilla, but I didn’t want them quite as sweet as typical blondies. I also wanted to make them dairy-free, which met eliminating butter, a key blondie ingredient.

In place of butter, this recipe calls for almond butter and coconut oil, and after several recipe tests, I finally landed on the right ratio. And combined with the other ingredients, these blondies have the perfect texture. They’re chewy, moist and golden brown, and you’ll never miss the butter.

What is the difference between a blondie and a brownie?

Blondies are often referred to as blond brownies. While they’re both dense and chewy bars, brownies contain chocolate – either in the form of cocoa or melted chocolate. Blondies, on the other hand, have a caramel-like taste with an emphasis on brown sugar and vanilla as key ingredients.

For me, I think of blondies as less like brownies, and more like chocolate chip cookie bars, especially since my favourite way to enjoy them is loaded with chocolate chips.

After you try this blondie recipe, if you’re craving brownies, I highly recommend these salted almond butter brownies!

Details on the ingredients

Brown sugar – It helps create a rich butterscotch/caramel flavour and a moist and chewy texture.

Cane sugar – Just a quarter of a cup for added sweetness. You can use granulated sugar if you don’t have cane sugar.

Almond butter – There’s half a cup of natural almond butter in this recipe, so you could really call these blondies almond butter blondies. It’s used in place of butter and adds some healthy fats.

Coconut oil – Just two tablespoons work with the almond butter to replace the butter in this recipe.

Eggs – Two large eggs for added moisture and some leavening.

Vanilla – A full tablespoon of vanilla extract works with the brown sugar to enhance the butterscotch flavour.

Almond flour – Not only does it keep these blondies gluten-free, but it keeps them moist and chewy.

Coconut flour – Just a tablespoon works to balance the moisture of the almond flour.

Baking powder – For leavening to help the blondies rise.

Salt – Kosher salt in the batter and sea salt sprinkled on top before baking.

How to make almond flour blondies

Step 1: Add your sugars, almond butter and coconut oil to a large mixing bowl and, using an electric mixer, beat until the ingredients are well combined.

Step 2: Beat in the eggs, one at a time, and then the vanilla. Continue to beat on high until the mixture turns a lighter colour. This may take a few minutes.

Step 3: In a small bowl, whisk together the flours, baking powder and salt. You may need to sift if your coconut flour is lumpy.

Step 4: Gradually add the dry ingredients to the wet mixture, beating on medium speed until just incorporated. Don’t over mix.

Step 5: Stir in most of your chocolate chips, reserving some for the top of the batter.

Step 6: Spread the batter out into an 8-inch square pan that has been greased and lined with overhanging parchment paper. Add more chocolate chips to the top and a sprinkle of sea salt. Bake on 350F for 27-29 minutes.

Are blondies supposed to be gooey?

You don’t want your blondies undercooked and gooey, but you want them soft and chewy. So taking them out of the oven when the middle is still a little tiny bit gooey is a good idea. The bars will continue to set up in the pan as they cool. If you leave the blondies in the oven until they are fully baked in the middle, they will be too hard and dried out once they cool.

How do you know when blondies are done?

Do blondies need to be refrigerated?

No, they keep best at room temperature in an airtight container.

How long will they last?

If stored properly, these blondies will last for 5-6 days. The almond flour keeps them moist, so even after a few days, they won’t taste stale or dried out.

Can you freeze them?

Yes. Just store the blondies in a single layer in a freezer safe container, or in between sheets of wax paper. They should last for up to 3 months. Let them defrost at room temperature before enjoying.

If you make these almond flour blondies, I’d love to hear what you think in the comments below!

Almond Flour Blondies are soft and chewy with a rich butterscotch flavour and plenty of dark chocolate chips. They’re also gluten-free and dairy-free, made with almond flour and no butter!