Grain-Free Pumpkin Chocolate Chip Waffles are fluffy, filling and perfectly spiced for the season! And they’re made with almond and buckwheat flour, so they’re not only grain-free, but gluten-free too! 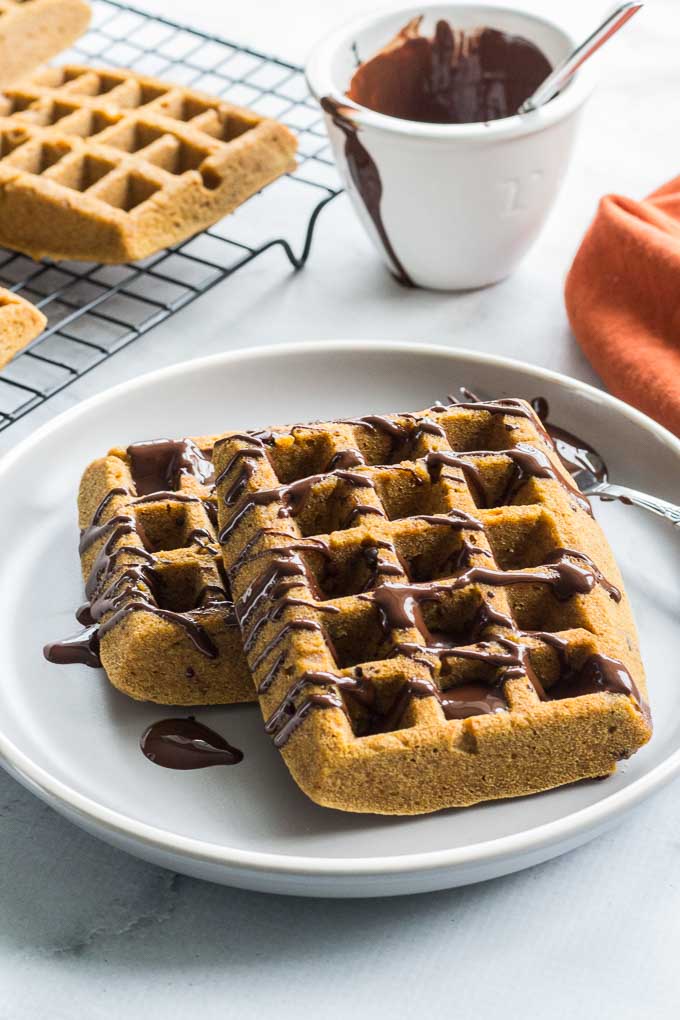 So after a string of savoury meals like stuffed peppers, vegan chili and French onion soup, I’m finally sharing a sweet recipe with you today! And since it’s October (how the heck did that happen?), I thought it was about time I broke out the pumpkin!

I first made these Pumpkin Chocolate Chip Waffles a few weeks ago and shared them on Instagram. And then I got distracted making other recipes and didn’t follow-up with a recipe post. Lucky for you, I’ve had time to perfect this recipe, so these waffles are ready for sharing!

I’m also excited about these waffles because they’re grain-free and gluten-free. They make a perfect breakfast if you’re trying to cut back on grains, or if you follow a gluten-free diet. And they’re on the healthier side, made with coconut sugar, extra virgin olive oil, cashew milk, eggs and pure pumpkin! And yes, lots of pumpkin spice. 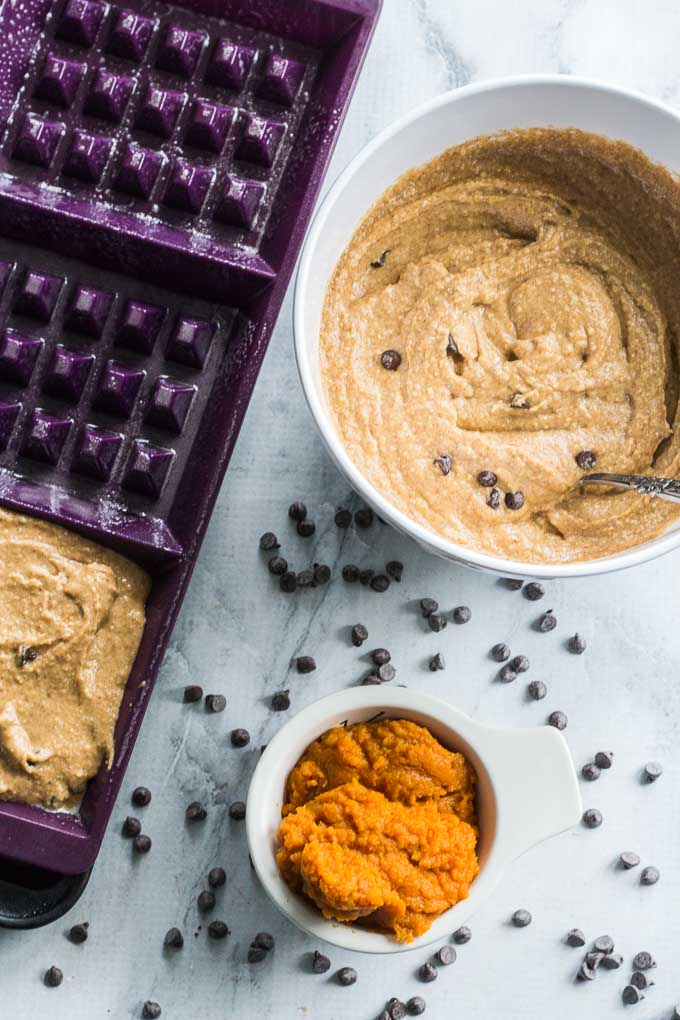 What is Buckwheat Flour?

If you cook and bake a lot of grain-free or gluten-free recipes, you are probably familiar with buckwheat. Up until a few months ago, I wasn’t that familiar with it and assumed from the name that it was a grain. It’s actually a seed, from a flowering plant and not related to wheat or grains in the grass family at all. Since it has grain-like qualities, it’s often referred to as a pseudo-grain.

Buckwheat has a nutty flavour and is high in nutrients and fibre. As a popular substitute for wheat, it’s perfect for grain-free or gluten-free baking.

I first tried buckwheat in these Raspberry Lemon Chia Buckwheat Muffins. I actually used buckwheat flakes. So when I started testing grain-free waffle recipes, I decided to try buckwheat flour. You can get light or dark buckwheat flour. The dark flour is just a result of specks from the ground hull remaining in the flour. 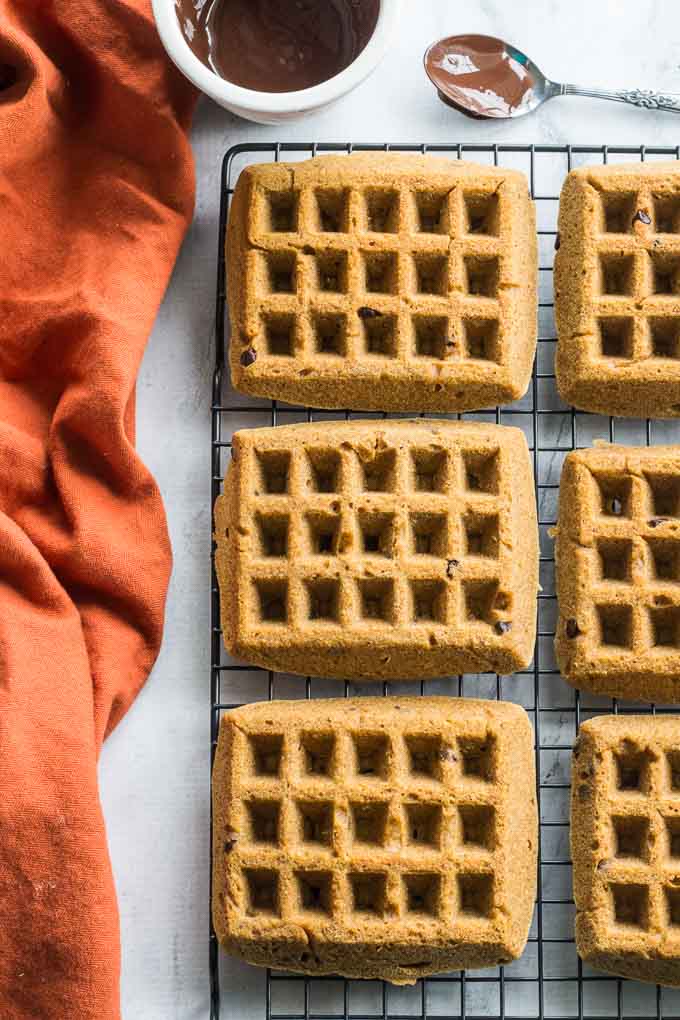 If you make these Grain-Free Pumpkin Chocolate Chip Waffles, I would love to hear about it in the comments below! Or take a pic and share on Instagram by tagging @crumbtopbaking.

And if you’re looking for other pumpkin recipes to help you use up that can of pure pumpkin you opened to make these waffles, check out the following pumpkin recipes on Crumb Top Baking:

Grain-Free Pumpkin Chocolate Chip Waffles are fluffy, filling and perfectly spiced for the season! And they’re made with almond and buckwheat flour, so they’re not only grain-free, but gluten-free too! 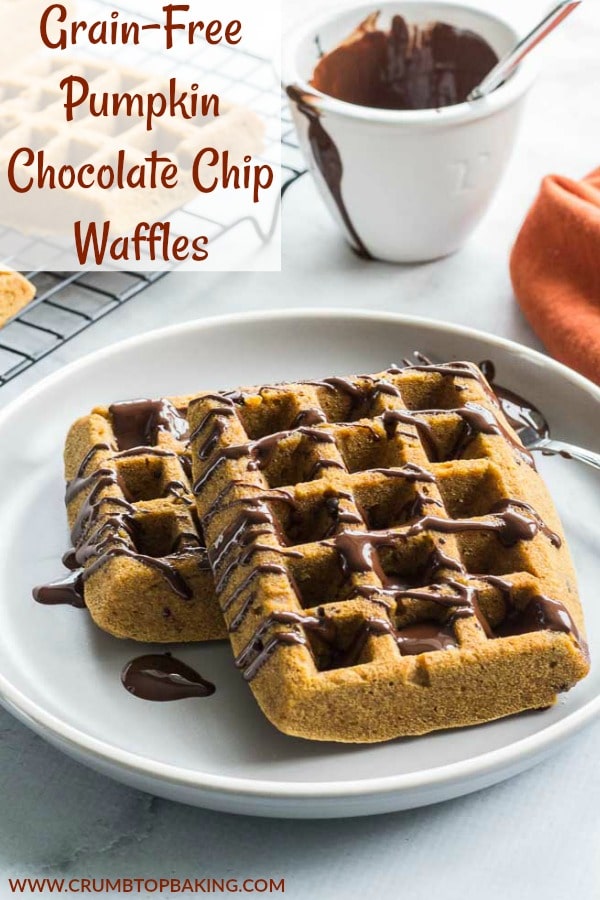