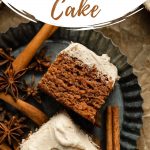 This easy Apple Spice Cake will be your new favourite autumn dessert! It’s made with whole wheat flour, apple pie spice and apple cider, and topped with a vegan buttercream frosting. It’s the perfect cake to serve for Thanksgiving or Christmas dessert!

Single layer snack cakes are my favourite desserts to prepare for gatherings. They come together quickly and serve up easily. And they’re always a crowd pleaser!

My all time favourite (and reader favourite) is this vegan chai cake with orange cardamom frosting. It’s so easy to pull together and always a go-to dessert for me around the holidays.

The same will be true for this vegan apple spice cake going forward!

This cake is lightly spiced, with a soft and tender crumb, and the sweet vegan buttercream perfectly complements the taste and texture of the cake.

Details on a few ingredients

Apple cider – Apple cider adds a subtle apple flavour to this cake without having to add apples or applesauce. I used fresh pressed sweet apple cider which is just pressed apples. You can use reduced apple cider (just boiled down on the stovetop) to get a more concentrated apple flavour, but to save time, I didn’t do that for this recipe.

Cinnamon – As the apple pie spice I was using had a pronounced star anise flavour, I added extra ground cinnamon to the cake. You can reduce the amount if your apple pie spice is heavy on the cinnamon.

Coconut sugar – The caramel flavour of coconut sugar enhances the flavour of the apple cider and warm spices. You can substitute brown sugar with similar results.

Butter – To keep this recipe vegan, I used vegan butter to make the buttercream frosting and brought it to room temperature so it would whip up easily. If you don’t need this recipe to be vegan, you can use regular butter.

Powdered sugar – Also called icing sugar. You’ll need this to sweeten and thicken the frosting. If your sugar is lumpy, be sure to sift it first so your frosting turns out super creamy.

How to make apple spice cake

In a large bowl, whisk together the flour, sugar, spices, baking soda and salt.

Add in the milk, apple cider, oil and vanilla and stir until just combined. Don’t over mix.

Pour the batter into a 8-inch pan lined with overhanging parchment paper and bake for 24-26 minutes, or until a toothpick inserted into the middle comes out clean.

Remove from the oven and let cool completely on a wire rack before frosting.

Add the softened butter to a mixing bowl and use an electric mixer to beat until smooth.

Gradually beat in the powdered sugar until smooth and fluffy. (If you want your frosting sweeter and thicker, you can add more powdered sugar. I suggest adding a few tablespoons at a time).

Add the apple pie spice and vanilla and beat again until incorporated.

Make ahead and freezing instructions

Although I think this cake is best enjoyed freshly made, you can store the frosted cake, covered, in the fridge for 3-4 days.

You can also make the cake 1-2 days in advance, leave it unfrosted and store it covered at room temperature. When ready to serve, whip up the buttercream and frost the cake.

You can also make the frosting 1-2 days in advance and store it in an airtight container in the refrigerator. It will firm up so you’ll need to let it sit at room temperature for a few minutes before giving it a good stir and then frosting the cake.

You can store the unfrosted cake in the freezer for up to 3 months. Just let it cool completely, wrap it tightly in plastic wrap and place it in an airtight container or resealable freezer bag before freezing it.

To defrost, keep the cake in the plastic wrap and place it in the refrigerator the day before you want to serve it or leave it at room temperature for a few hours. Once defrosted, make the buttercream and frost the cake.

Can apple juice be used instead of apple cider in this cake?

While I haven’t tested this, I have read that apple juice can be used in place of apple cider in a pinch. I would make sure the apple juice is unsweetened. If you try it, please let me know how it goes!

No. The apple cider in this cake adds a sweet apple flavour. If you substitute apple cider vinegar, the cake will have a distinct vinegar taste.

Can another type of flour be used in this cake?

I’ve only tested this apple cider cake with whole wheat flour. All-purpose white flour isn’t as absorbent as whole wheat, so if you try to use it, you will need to reduce the quantity of wet ingredients used or add more flour.

What size baking pan is best for this cake?

How do you store apple spice cake?

If the cake is left unfrosted, it is best stored in an airtight container at room temperature. If it’s frosted, it should be refrigerated.

How long will this apple spice cake last?

This easy Apple Spice Cake is made with whole wheat flour, apple pie spice and apple cider, and topped with a vegan buttercream frosting!