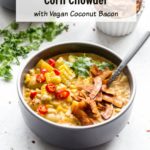 Dairy-Free Corn Chowder is thick and chunky with fresh corn, baby potatoes and a rich cashew cream base. It’s also vegan, with a spicy kick, and topped with crunchy coconut bacon. Enjoy it as an appetizer, side dish or main meal! 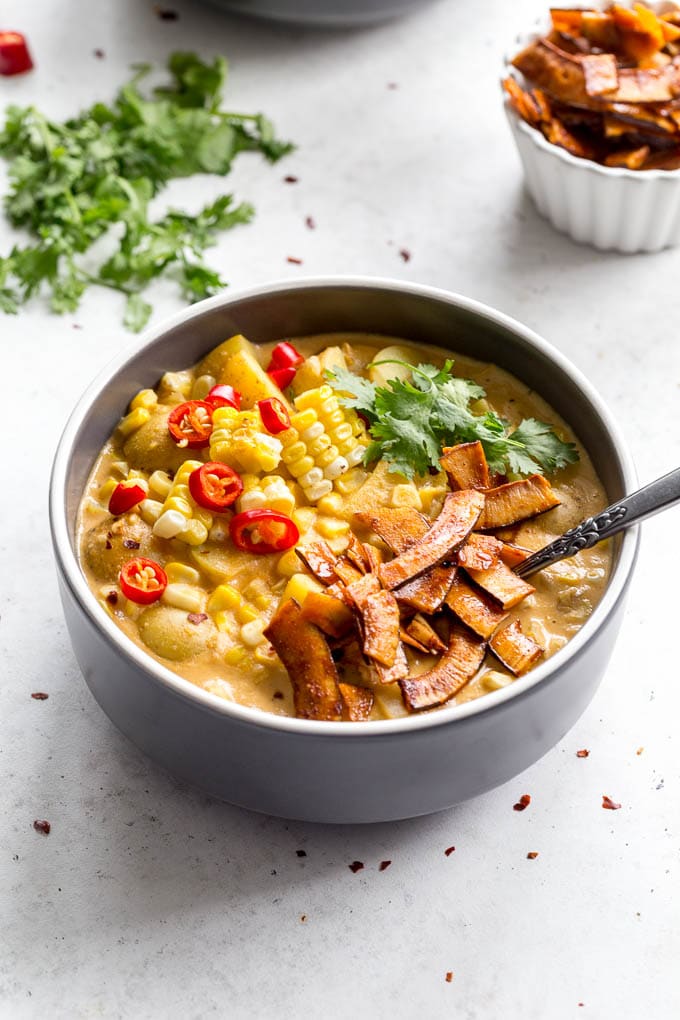 Isn’t it the best? It’s sweet and juicy, and works so beautifully in savoury summer dishes. This summer vegetable orzo salad (with roasted corn) has been on repeat all summer, and now this vegan corn chowder is kicking into high gear with corn season upon us.

If you have an abundance of fresh corn (say, from a recent farmer’s market visit), this spicy corn chowder is just for you. It’s inspired by this dairy-free seafood chowder which has a thick and creamy cashew base, except of course, this corn chowder is completely vegan and loaded with a whopping four cups of fresh corn!

And then there’s the coconut bacon…… 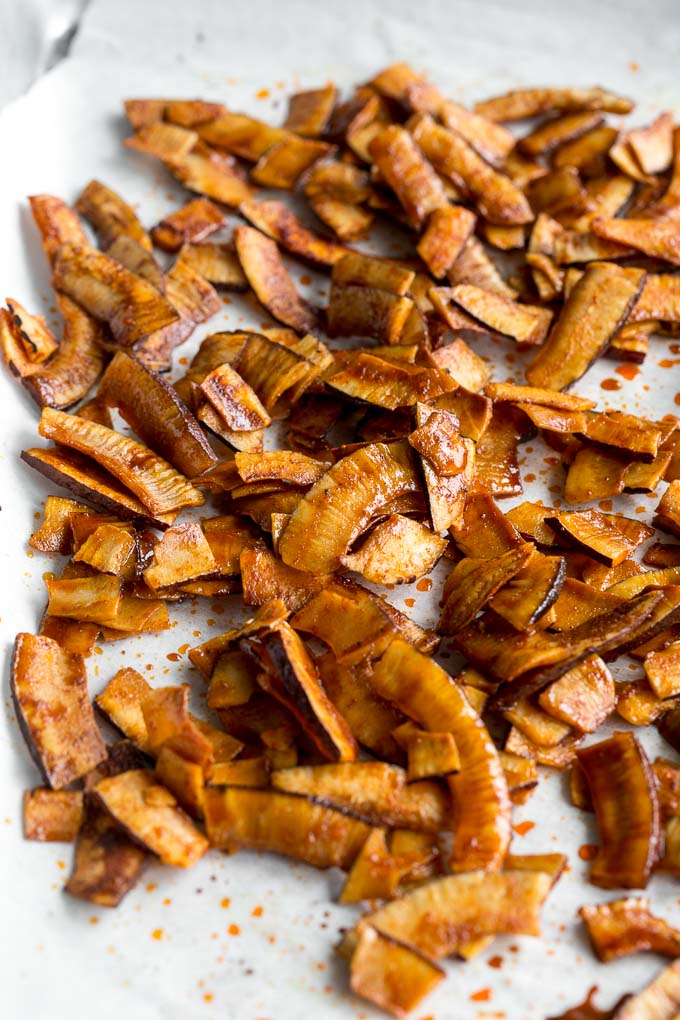 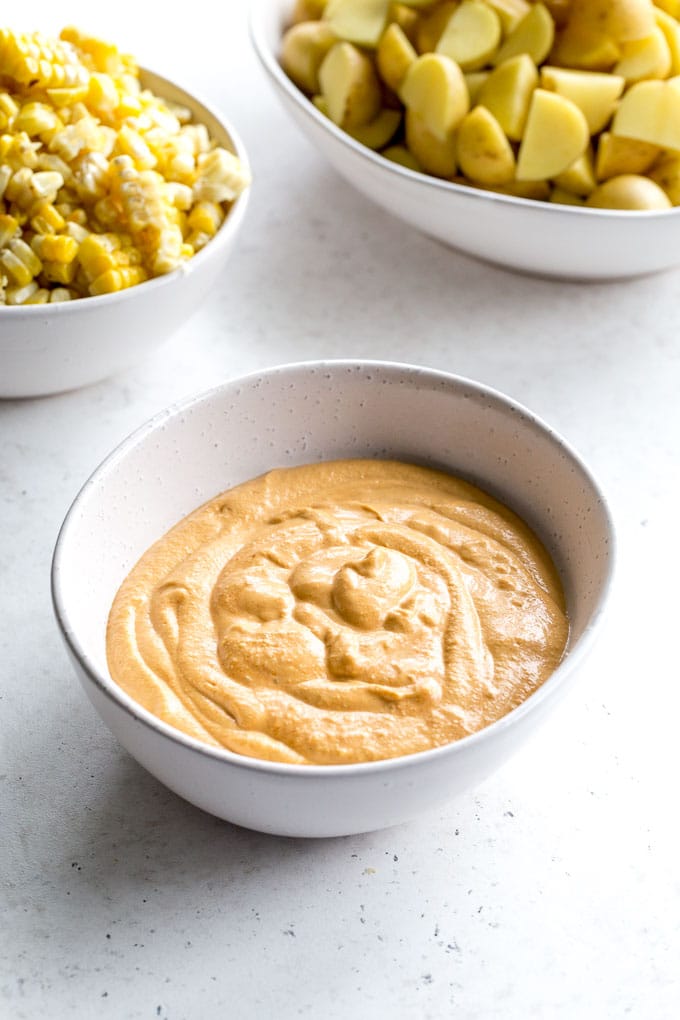 How do you make corn chowder with cashew cream? 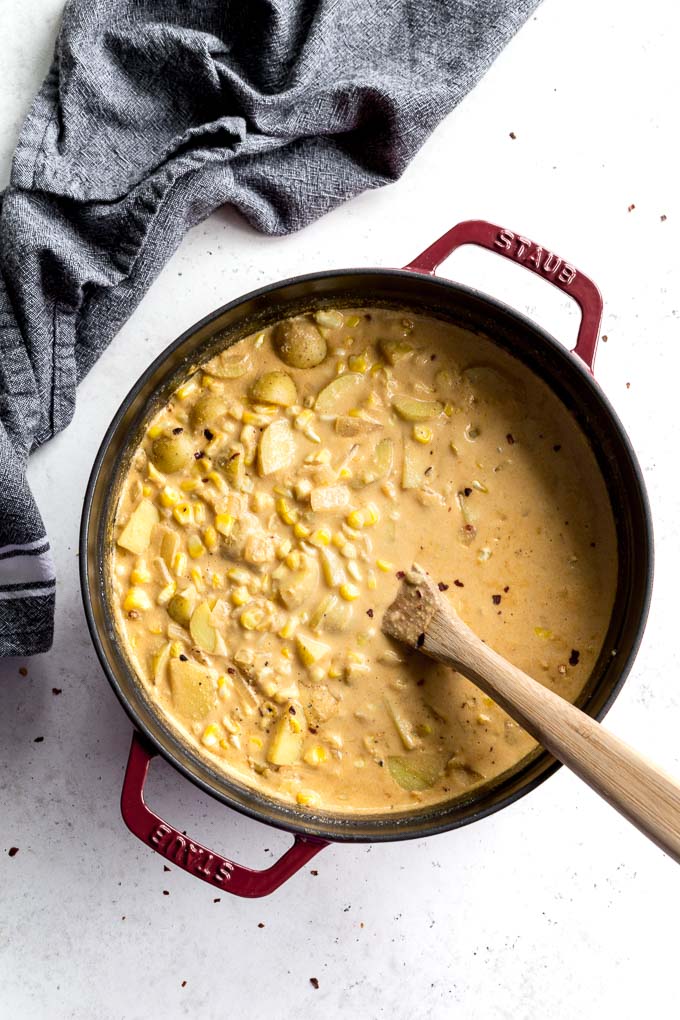 How do you thicken corn chowder?

Since we’re talking about dairy-free chowder, some dairy-free thickening options include coconut milk, potatoes and cashews. I’m opting for cashews as the creamy base for this corn chowder. It’s simply cashews soaked in hot water, and then puréed with liquid and desired seasonings.

This chowder is ultra thick and chunky. If you still want it thick, but a little less chunky, carefully add some of the chowder to a blender (it will be hot) and blend until creamy. Pour the mixture back into the chowder to thicken it.

Absolutely! While this recipe uses fresh corn, you can easily sub in canned or frozen corn. Just remember canned corn will only need to be cooked in the chowder for about two minutes, while frozen will require about five minutes.

Can dairy-free corn chowder be frozen?

I wouldn’t recommend freezing this corn chowder. I’ve tested it and the texture gets a little gritty and the chunks of potato get mushy when re-heated. 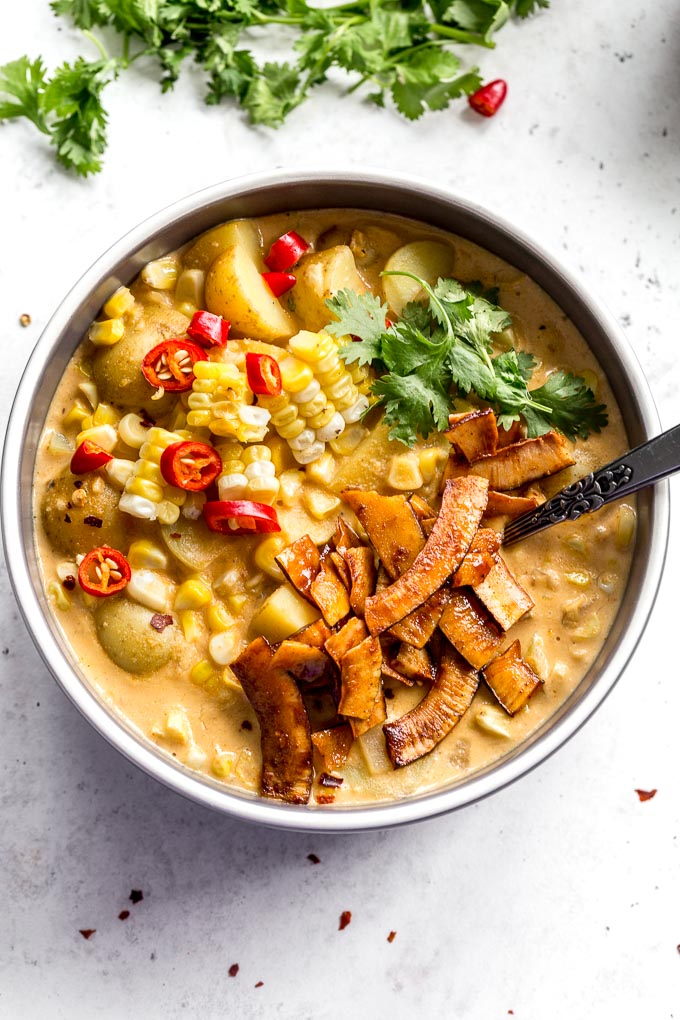 Some additional tips for making this vegan corn chowder:

Pin this Dairy-Free Corn Chowder to make for dinner tonight! 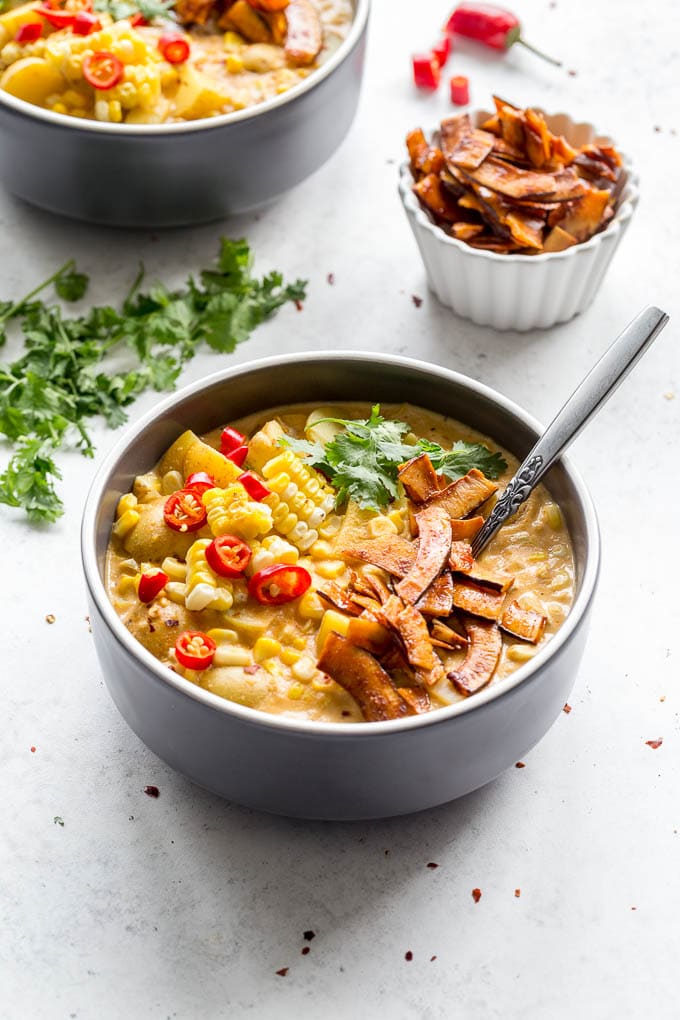 If you make this Dairy-Free Corn Chowder with Coconut Bacon, I would love to hear what you think in the comments below!

Dairy-Free Corn Chowder is thick and chunky with fresh corn, baby potatoes and a rich cashew cream. It’s also vegan, with a spicy kick, and topped with crunchy coconut bacon. Enjoy it as an appetizer, side dish or main meal!

For the cashew cream:

For the coconut bacon:

Recipe for the coconut bacon is adapted from Clean Eating Magazine’s recipe for Sweet and Salty Coconut Bacon and is also used in this Kale Caesar Salad recipe.