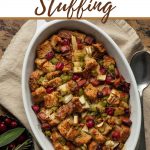 This Whole Wheat Stuffing Recipe is made with whole wheat bread, kielbasa sausage, tart cranberries, juicy apple and fresh herbs! It bakes up golden brown with crispy edges and makes the perfect addition to your Thanksgiving or Christmas menu!

We have a few essential side dishes for holiday meals, and this easy whole wheat stuffing is one of them!

Okay, we have more than a few essentials, like this homemade cranberry sauce and air fryer green beans, but stuffing is definitely non-negotiable!

*This post was originally published in November 2019. It has been updated with new photos and text, including adjustments to the recipe and helpful tips for readers.

This recipe is the perfect combination of sweet, tart and savoury and it couldn’t be easier! The herbs, sausage and aromatics cook up together while the bread cubes get toasty in the oven. Then, it’s all mixed together with fresh cranberries, apples and broth and baked for an hour!

This stuffing is a meal in itself and if you haven’t tried adding fresh cranberries to your stuffing, it’s a must try!

Why you’ll love this recipe

What’s the difference between stuffing and dressing?

The difference is in how they are prepared.

Over time, the practice of cooking stuffing in the bird has decreased as food safety concerns have increased. Now, the term ‘stuffing’ is applied more broadly. So, even if it’s baked separately in the oven, it’s usually called stuffing.

What you call it will likely depend on where you live or what you grew up calling it.

We’ve always called it dressing in Newfoundland, regardless of how it was prepared.

Newfoundland dressing is actually a bit different than most. It’s a simple mix of bread crumbs, butter, onion, salt, pepper and summer savoury (a locally grown herb that isn’t too common elsewhere).

Perhaps one day I’ll share this recipe, but for now, let’s focus on this sausage, apple and cranberry stuffing recipe!

Details on the ingredients

Bread – The recipe calls for whole wheat or multigrain bread cut into 1-inch cubes. You’ll want your bread to be stale so it’s more absorbent, and fresh bread will just create soggy stuffing. For the best results, I normally toast the bread cubes.

Apple – One Honeycrisp apple is chopped into ½-inch pieces and added to the stuffing mixture. I keep the skin on but you can peel the apple if you prefer.

Sausage – You’ll want to use smoked (pre-cooked) kielbasa for this recipe. I’ve tried it with both pork and turkey kielbasa. Using pre-cooked sausage is a great way to save a little time in preparing this stuffing. Feel free to use other types of pre-cooked sausage.

Celery, onion, garlic, sage and rosemary – These veggies and herbs are the aromatics that add a depth of flavour to the stuffing. You’ll want to saute them before adding them to the stuffing. This will draw out the aroma and soften them a bit.

Oil – I used extra virgin olive oil in place of melted butter to help keep the stuffing moist. You can use another type of oil or butter, if you prefer.

Broth – This also helps keep the stuffing moist and adds a flavour as if the stuffing was cooked in the turkey! I prefer to use no salt added chicken broth. If you only have regular chicken broth, you may wish to reduce the amount of salt you add to the stuffing.

Egg – Just 1 egg is added to help bind the stuffing and keep it from drying out.

Salt and pepper – You’ll need 1 teaspoon of salt and a 1/4 teaspoon of ground black pepper. Add more or less to suit your taste.

How to toast bread cubes for stuffing

Preheat the oven to 250F and arrange the bread cubes in a single layer on a large baking sheet.

Toast the cubes for 25-35 minutes, or until they are crispy, like croutons. Keep an eye on them. They shouldn’t brown but they will dry out.

How to make whole wheat stuffing

Heat a tablespoon of oil over medium heat in a skillet and brown the sausage. (This should just take 3-5 minutes).

Add the celery, onion, garlic and herbs. Saute until softened and fragrant, or about 5 minutes. Reduce the heat if necessary.

In a small bowl, whisk together the broth, oil and egg. Pour over the stuffing mixture, add the salt and pepper, and gently toss to combine until the bread cubes are coated.

Transfer the stuffing to the prepared baking dish and bake for 55-65 minutes. (Check on it after 30 minutes. If it’s browning too quickly on top, just cover with foil and continue baking).

When it’s golden brown and crispy on top, remove from the oven and serve.

If you have leftover stuffing, store it in an airtight container in the fridge for 2-3 days.

You can warm leftovers in the microwave but, to get the stuffing crispy again, it’s best to reheat it in the oven. Just spread it out on a baking sheet or in a dish and bake it on 350F for 10-15 minutes, or until heated through and crispy on top. Just keep an eye on it to ensure it doesn’t burn or dry out too much.

I don’t recommend fully preparing the stuffing in advance and letting it rest in the fridge, but you do have some make ahead options.

You can prep some of the ingredients in advance and assemble when ready to bake. This includes toasting the bread cubes and storing them covered at room temperature. You can also chop the sausage and prepare the aromatics and store them in the fridge until ready to use.

The other option is to bake the stuffing and store it in the fridge for 1-2 days. Then, you just need to reheat it the day of your holiday feast.

This is a whole wheat stuffing recipe, so I recommend using whole wheat or multigrain bread (as long as it doesn’t have too many seeds). But, when it comes to stuffing, you can really use any kind of stale bread you have on hand.

What’s the best type of sausage to use in stuffing?

To keep this recipe easy, I use pre-cooked (smoked) kielbasa sausage. To make it a little leaner, you can also use lean turkey kielbasa. You can use any type of pre-cooked sausage, or if you prefer, you can cook some ground Italian sausage and add it to the stuffing mixture.

What type of apple is best to use in stuffing?

Sweet and tart apples with a crisp bite are always great for adding to stuffing. We love to use Honeycrisp apples, but Pink Lady, Gala or even Granny Smith apples will work too.

Can you use dried cranberries instead of fresh?

I haven’t tried this recipe with dried cranberries but they should work. They will just create a sweeter and less tart flavoured stuffing.

Can you use frozen cranberries?

Can you freeze stuffing?

I don’t recommend making and freezing the full batch, but I’ve frozen leftover stuffing in small portions. Just let the stuffing defrost in the fridge overnight and reheat in the oven on 350F for 10-15 minutes.

Other Thanksgiving side dishes

This Whole Wheat Stuffing Recipe is made with whole wheat bread, kielbasa sausage, tart cranberries, juicy apple and fresh herbs! It bakes up golden brown with crispy edges and makes the perfect addition to your Thanksgiving or Christmas menu!